Browse: Home > Did bronze make the comeback I predicted?

Did bronze make the comeback I predicted?

Is everything old always new again?

5 years ago I spoke with Ted Oberg, a pioneer of the glass industry, and looked at the origins of glass products we know and loved then. I anticipated that bronze and ambers were a comeback in less intrusive and more creative ways.

Ted Oberg is a pioneer of the glass industry, previous glass person of the year, NSW Association president, not to mention inventor of the speed cutter – a glass-cutting tool, which revolutionised the industry around the world. Simply known as Ted to most, he founded Sydney Glass in 1958 which still proudly sits on Canterbury Road today in the same location as South West of Sydney, albeit a larger version of its original self. Ted has been a glass merchant for almost six decades so is well placed to comment on glass trends, specifically the revival of glass we may deem “retro”. Ted can best be described as a humble man who is always happy to give up his time to talk about his passion for glass.

Ironically, Sydney Glass was founded on the back of a dying trend – the bevelled mirror! When Ted lost his job as a beveller at Cheaper Glass where he worked from 1955 to 1958, Sydney Glass was born. During that time, bevelled edge mirrors were very fashionable; however, this specialised trade, which required a steady hand, died out in the late 50s to early 60s to be replaced by machines fit for purpose – but eventually so did the bevelled mirror, for a while at least arguably a retro product with some vouching for its longevity. Either way its popularity has experienced peaks and troughs much like a hemline but sells well today.

Ted describes the comeback of the older glass as a ‘generational trend’, which comes in waves of approximately 30 year cycle with the best of the original designs making a comeback with each new generation. Another good example of this is the Antique mirror. Ted recalls buying a lot of antique Mirror in the 70s. Obrien’s Glass in Padstow had a silvering plant and silvered the mirrors to make them look old. Now in 2015, due to high demand, Sydney Glass is importing this new product in three colours, grey, bronze and silver, and it’s selling well. This is a product Ted never predicted would see such resurgence.

Thinking of retro glass, the first product that springs to mine is Georgian Wire Cast (GWC) and other variations such as “chicken wire” glass. In the last 12-18 months, Greater Glass has used GWC at the request of architects and designers alike. It seems to have made a comeback in the commercial fit out space. Funky restaurants, hotels and shops are all reviving this 70-year-old product. Ted gave some insight to the origins of this product. The earliest he can recall this product being used was in tractors but never in buildings. With the Post-World War 2 era it was the product of choice for factory sawtooth grooves. In fact Ted recalled glazing the original British Paints factory around this time. This style of glass rood was replaced by steel and in the 1970s with GWC glass became the glass of choice for shower screens. I’m sure many of our grandmothers’ homes still have an original shower with a variation of wired glass. However, with the introduction of the Australian Standard, AS1288 – Glass in Buildings, GWC was deemed to ‘B’ Grade Safety and no longer for purpose in showers. Now 30 years on, it is appearing as a feature glass and in restoration projects! 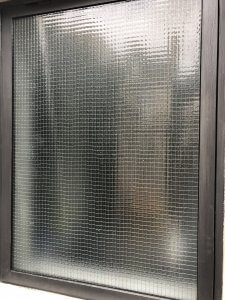 So what’s the next hot pick for retro glass?

This is anyone’s guess, but if the copper tones featured heavily in the recent reality shows are anything to go by don’t be surprised if we see bronze and ambers comeback in less intrusive and more creative ways.

Bronze and amber glass was a must have in the 70s, but completely died in the 1980’s. Those taking full advantage of the energy saving revolution would love the wide range of Low E / energy efficient glass available today and may not realise that a large proportion of the early reflective coated products were bronze in colour. While this has been overtaken by clear, light grey and in keeping with customer demand, the bronze might come back.

Reflecting on this article and fast forward 5 years. Georgian Wire cast glass is still a hugely popular product we know and love today and one of my faves.
As for my bronze prediction copper and natural tones are still in vogue with bronze mirrors – widely specified and super on trend.